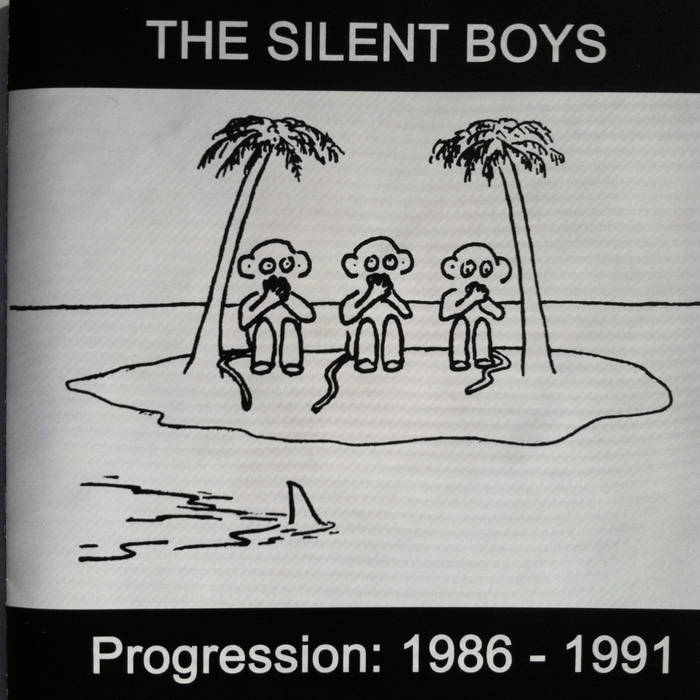 THE BIG TAKEOVER:
80s fanzines had a bad attitude about Anglophile bands, but that was xenophobia, as this collection reminds. This Virginia band has released their albums this decade, but Progression reveals they were inspired bastard children of Brit post-punk, C-86 jangle-guitar, and New Zealand ethereal pop back in those halcyon days. Heard now, the nascent 'Boys are roughly like Joy Division and early Cure backing Lawrence in Felt (apparently with a key assist from our Feelies), and the opening "Band From Heaven" reverently refers to the Fall's classic 1979 7" "Totally Wired." There's resemblance, too, to the Liverpool explosion (Bunnymen, Wah, Teardrop Explodes) and early Creation Records bands, with singer Wallace Dietz retaining some of the icy semi-detached bravura of those bands. This is fun while a new fourth LP, Princess By the Sea, looms. (Jack Rabid)

BABYSUE.COM:
Originally formed in the 1980s, The Silent Boys reformed in 1999 and have since released three new albums (Beauty Tips, Wishing Well Eyes, One Step Closer). This CD collects some of the band's best tracks from their early days. Some of the low fidelity pop cuts on this album bear a slight resemblance to The Television Personalities...while others sound just like what they are: lost garage pop nuggets from the past. The sparse sounds on this album are probably too peculiar for the casual listener, as the guys in The Silent Boys were (and probably still are) playing for a very select audience. There's a lot to take in here...23 tracks of smart and slightly rough guitar pop. The more you listen to this band's music...the more it grows on you. Our favorite tracks include "Band From Heaven," "Scream," "Black and White," "India," and "Dreaming Away." (Rating: 5/6)

DAGGERZINE:
I had no idea that Virginian Wallace Dietz (who IS The Silent Boys) has been perfecting his craft for over two decades. I first heard about the band from the indiepop list and Wallace was nice enough to send me a few of his previous releases (them being 2007’s ONE STEP CLOSER, 2006’s WISHING WELL EYES and 2004’s, BEAUTY TIPS). This, as the title implies, is an odds and sods collection spanning those 5 years in the late 80’s and into the 90’s. There’s 23 songs in all and there’s some interesting liners where Wallace describes the comings and goings of his life when the songs were recorded. The songs definitely sound of another time, a handful of the tracks, like “Scream” and “Plastic Cowboy” sound like they could have been recorded for the Factory label (some Joy Division influence there an even a big New Order influence on the opening cut, “Band from Heaven”) while others are janglier and bear more of a Feelies influences (“See You Later”, “I Wanted To See You”, etc.) and plenty of C86 and Sarah Records moments creep in as well. The band is more than the sum of its influences, however, and if you like any or all of the bands mentioned here then this will be a most pleasant surprise. (Tim Hinely)